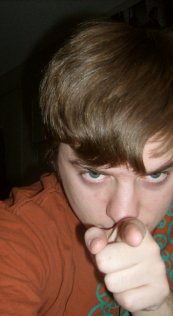 Ahoy! It is I, Overkill. (I really need to rewrite this at some point, since it’s like mostly a dumb blurb I wrote a few years ago and a bit has changed since then, oh well.)

I am a guy, and I live in Canada. I was once a student in four-year program at the University of Guelph, Ontario, where I studied Computer Science, a field that means a lot to me!

Since infancy, I’ve been playing a vast library of video games, and trying to make game ideas into a reality. Ever since Grade 4, I had dreams of making games. Of course, at that age, all I really got done were a bunch of silly scribbles of people that are hilariously bad.

Later, in Grade 7, I started to learn how to program. Now that I’m much, much older and wiser, I know many things that make games great, and a large palette of programming languages to accomplish these ideas with. My only real obstacles are my indecisiveness and utter lack of free time.

Oh, hey, to the right of this, there’s a photo of me, pointing at you.

What does a silly nobody like Overkill need a journal then? It’s clear he doesn’t have any friends and isn’t making games. Isn’t this just going to turn into a repository of emotional whining about deprival and inactivity?

The answer is uncertain! However, I’m not alone– at least in the latter respect of not making games. In fact, this journal was inspired by McGrue and Kildorf, two of my most hated rivals (also: loved friends), who are currently engaged in fierce and valiant combat!

Thrusting at each other with all varieties of magical crystals and sleepy-headed amnesiac protagonists, greater enormities are arising from the midst of this choas! Heroic magical artifacts, called VIDEO GAMES bubble and pop with mystical creative glowing energy.

McGrue and Kildorf are boastfully posting journal entries, and making weekly updates to their games in order to stir up competition and to instill shame in the lazy! They call this Gruedorf. There’s even a scoreboard of the whole thing here.

I thought I’d join this cruscade against laziness, and hence this journal. There is still hope for me to make an inspiration creative work. So this journalized game-making battle will hopefully shower the indie game community with inspired games one day!

Ironically, despite choosing a site name with bananas in it, I don’t really like bananas because I still have nightmares of banana flavored anti-biotics from when I was an often-sick child.

Anyway, Bananattack, is many things: my journal, my game ‘studio’, my junk collection, my artwork dump. It describes an insignificant person’s struggle to make something of himself. I want to be a renaissance man, a man of many talents, so I can aid and entertain others.